I’m not usually a fan of deafult settings. I can personalize a project or a preference to be easier to use or to speed things up. In this case I want to talk about trying the default items out. I’m a big fan of some of compressor’s default settings. One in particular is the YouTube compression. This was added in Compress

or 3.5 I believe. Just go into compressor, just like you already do, and do a search for youtube in the presets. Select that option and submit away. You get a really nice image up to 720p. It’s an H264 image that is about 3.6 GB per hour. Give that a shot and see how it helps your image.

You may be an expert in Avid or Final Cut Pro, but there may have been a couple times where you’ve had to open After Effects to do one quick change. This may have been easy, but in many cases you’ve never opened After Effects before. You figure you know can work your way around in Photoshop so how hard could it be? Well, if you need to send something to the render queue and need to export something with a transparent background, it could be tough.

I love this ad. I rewatch it on the DVR as often…

I haven’t jumped on the bandwagon enough to buy my own Canon 7D or any other DSLR with HD video capabilities. I have edited several short pieces for a client using the 7D workflow and while I have to say that the video looks amazing, that isn’t what this post is about.

Nancy (my wife/business owner) and I went to Miami, Florida to do a shoot with her taking hold of still photography and I taking an EX1 and playing DP for a few days. It’s always a great experience to get out of the edit bay and shoot something yourself. It not only gives you a reason to get out of the solitary confinement that is your edit space, but you can put into practice the best techniques you have learned from just watching through footage (all my clients love the rack focus… about 90% of the time). I get a bit more respect for the DP while out shooting because I can never get something to look exactly how I want it to when it comes in from certain DP friends of mine.

Here are my answers to the 5 questions that I read on PostFifthPictures.com.  If there are more, just let me know.  In some cases I should call the VIZ FX team…but I will give this a shot, first.  If you have any questions about my answers, please let me know. 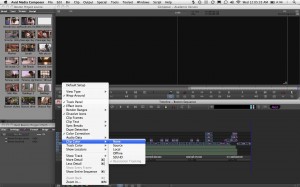 I love the clip colors feature in Avid Media Composer. It is so helpful. If you haven’t ever used it to its advantage, check it out.

From the hamburger menu in the bottom left corner of the timeline, select clip color. You have several options. The ones I use the most are HD/SD and offline.

I have this sample project open. It’s an SD project so I changed the settings to 1080 (HD) and then I turn on the HD/SD setting in the clip color. I can now see all of the titles stay one color and the clips become highlighted in yellow.

I’ve put off writing this entry for about three weeks because it was such an awful experience for me. I just finished a documentary and for the SEO sake of it I will refer to it as Hockey Doc. Overall it was a great experience. I finished the edit, locked picture and sent it off to Technicolor to get colored. It comes back, looks great and I plug in the newly colored version into my sequence. While editing the project I created these left or right third graphics that gave biographic information on each of the players, coaches and the others interviewed. So I took the raw file (before color correction mind you) from Final Cut Pro, exported the 7-10 second clip, imported it into After Effects, animated the clip in and out (see the example below) and then spit it back into my Final Cut Pro project.

It all seemed to work really well. That wasn’t the case though.

I got my colored version back, spit the new color corrected versions back into my After Effects compositions and then exported again. I rendered for DVD output using compressor. I burned a master DVD of the project in DVD Studio Pro. It should have just worked, right? Well it didn’t. The color of the After Effects clips would change slightly, becoming a little darker. The graphics also did not slide smoothly across the screen either way. Now normally I would spend a lot more time trying to fix the problem, but I had a deadline. This was on a Tuesday and it needed to be back in Valencia, California on a Thursday morning at the latest. I ended up staying awake until 4 AM trying to figure the issues. Here are a few steps I tried.

Continue reading "An Experience with Final Cut Pro, After Effects and Gamma Issues"…