Today I wanted to eat up some time by writing about my experience cutting Neil’s Puppet Dreams for the Nerdist channel and Henson Alternative. So here goes nothing. I have been curious about how other people get their jobs, how they work to cut their pieces and how it all comes together as I have been learning and cutting more and more so I hope this does someone a benefit.

Getting the job to edit Neil’s Puppet Dreams started about a year before I got the footage on a drive. That’s because it started with a connection I already had. My producer from Yo Gabba Gabba! felt that because of my experience in cutting notes with directors over e-mail, having my own system (I cut at home for YGG now so I could come home and put my kids to bed) and my “OCD” nature with handing shots off to VFX people (I kind of went over the top and made a google doc for each episode, treating each shot respectively and while it was over the top, we got the job done)..(take a breath sorry for this huge sentence)… that I would be a good fit for this project. While we had Neil Patrick Harris, it wasn’t a large blockbuster project. While it wasn’t a free project, it wasn’t a union project, but I like to do projects for the experience and because they are fun when I can pay the bills.

Rita sent me the scripts to the shorts without telling me who was attached to the project and I read them through to make sure it was a project I was interested in doing. I think she did this to see if I could do it for passion over profit. I accepted and we moved forward. It was when I read the scripts that I finally figured out that it was Neil Patrick Harris so I then decided to go for it and commit, as it would help my reel in terms of “star power” and cutting narrative shorts with a good amount of VFX.

I went to a meeting with our producer and met the director for the first time. Kirk Thatcher, our director, was awesome. He and Rita had worked together in the past at Henson. I was pretty much hired on Rita’s word. When this happens, you have to be sure to be your best because you not only reflect yourself, you reflect the people that stick their neck out for you. If you do great you not only become great in everyone else’s eyes, you become better in the person’s eyes that hired you AND people give them props as well. Make sense?

So… I came down to set one day to just get a feel for things. I stayed for about an hour. The sound guys gave me their details (some shots we have 12 active tracks of audio between different puppeteers being mic’d). I took some crafty (of course) and then left. I don’t really like to be on set too much because (yes, this is very Walter Murch-ish), but I don’t like to have any emotional attachment to any footage I get. I don’t like to know if it was a big deal to move the camera the way the director asked for because I like to know the shot as I am seeing it for the first time. I think this helps me psychologically handle the footage better.

I got the footage and it was already prepped by the Nerdist assistant editor, Phil Loeb. Phil did a great job prepping everything. I still assist on some projects (right now I am on Kung Fu Panda 3 as an assistant) and I loved the work that Phil did. We cut the project in Final Cut Pro. I had been using Avid a whole lot lately at Disney TV Animation, but I don’t have a hard time switching back and forth.

I hired one of my go-to assistant editors, Cameron Harper, to work with me. We had a quick turnaround, so Cameron started to do an assemble edit and stack some song pieces for me. On shows with puppets and large costumed/non-lip sync characters (Yo Gabba Gabba!), I like to have the audio timeline marked in colors with where people’s lines are. I can talk about this another time if anyone cares, but it helps during songs. So Cameron did that on a couple shows. Cameron took my editing class at Utah Valley University so he’s been trained to know how I think and like stuff prepared.

As I took Cameron’s assembles, I finessed and finessed. When I do a rough cut, unless the director has asked me otherwise, I always try to make it as final as possible. This is to avoid the simple notes like “wish we had sfx here” or “we should temp these fx.” While that may be common sense, I think it helps the director know you either share their vision or they haven’t given it to you all the way yet. I also feel like it is your chance to put your heart into it. So whenever I finish a draft of a cut, I stop, get up and walk around and think to myself “what else can I do here? what will take this to the next level?” and I try to do that until I really have no idea. 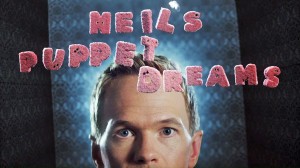 Sometimes that works and sometimes it doesn’t. For example, I think I got that on a few of the pieces (Lullaby) but when I did that for Bollywood Bovine, I didn’t understand that NPH was to be turning to another camera angle at the start of the song. So we communicated over cuts on FTP and e-mail and sat down once to go over it. Once. We sat down once. Now we did some iChat sessions and we did phone calls, but we really only sat down once before we finished the directors cuts. Pretty incredible I think.

We then sent the cuts to all the producers (NPH, David Burtka, Brian Henson, Nerdist, Janet Varney and more) and got all the feedback from them. It was great to see new things that other people noticed in order to make the cut even better. If you can let g

o of your own attachment to your edit and realize that the final product, that will still have your name on it, will be the best it can be because everyone has touched it, you will be happier and the product will be better. Remember, you are doing this for the good of the project/film/show/whatever. It’s a collaborative process.

Throughout this whole time we sent a lot of emails back and forth until we were all happy with the edits and I sent them off to VFX and sound. Having been a VFX editor in Utah, I enjoy the process a lot still. I made sure that unnecessary footage wasn’t on the timeline anymore and then did a media manage/Auto-Ducked the timelines out to FX guys I worked with on G

abba. I sent OMFs and cuts to the audio guys so pieces could be composed and then mixed. Then I delivered the pieces to Nerdist and they posted them with the 6 frame credits at the end. Ta-da. Easy, right? Yeah.

So there you have it. That’s the story, a good chunk of it anyway, about how it was to edit Neil’s Puppet Dreams. If anyone has questions, let me know. Everyone was a pleasure to work with and I would work with all of them again for sure.