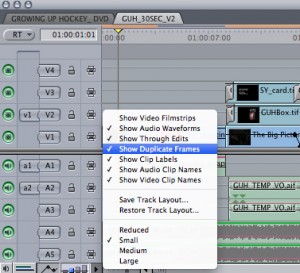 END_OF_DOCUMENT_TOKEN_TO_BE_REPLACED

We recently completed a project together with Three Coin Productions and ISM Films (see below for a description of what ISM Films does).

We did the editing and a few of the motion graphics (Three Coin Productions providing the rest) on this project that helps students and new filmmakers understand each process of filmmaking. This specific section can be found on the third disc which goes over Production (the first covers Development, the second Preproduction and the fourth Post).

END_OF_DOCUMENT_TOKEN_TO_BE_REPLACED

In the off chance that a DP asks me before he goes off to a shoot what kind of footage I would like, I always answer lots of coverage and points of view that I wouldn’t be able to see with my own eyes. I think this is the difference between a DP that can bring quality to your video and one that can’t. It’s easy to shoot what we can see with our own eyes, but the ones that can find something else, something we don’t see or normally notice, those are the ones I love to work with.

An example I will use is from The Killers new Blu-Ray/DVD from the 2nd track “This is Your Life.” The video is directed by Dick Carruthers, who has a great background of live concert DVDs. It is a fantastic live concert, I’d highly recommend in for your HDTV setup and Blu Ray collection. Some of the shots are a tad fast for me, I end up wanting more. That may be because I’ve been to a couple of The Killers shows though.

END_OF_DOCUMENT_TOKEN_TO_BE_REPLACED

I was the associate producer and editor of a new documentary, Growing Up Hockey. Garrett Smith, our awesome motion graphics artist, gave it a great look. Our premier sound designer and sweetener Nathan Hoffman touched it up as well.

The documentary goes through several factors in the hockey world such as getting over criticism from coaches, parents and others, making the cut, getting to the next level, adding mental toughness and more. It features interviews from Olympians, NHL All Stars, Stanley Cup Champions, NCAA championship coaches, NHL psychologists and NHL broadcasters.

END_OF_DOCUMENT_TOKEN_TO_BE_REPLACED

Approached by Brandon McMillian, host of NIGHT on Animal Planet, Bryce Randle cut a small demo for a new show aimed at documentary friendly networks. The demo was shown to full scale production companies and because of the work with Post Fifth Pictures, Brandon succeeded at getting a pilot created for a new show, Death Row Dogs.

END_OF_DOCUMENT_TOKEN_TO_BE_REPLACED

In January of 2009, we flew Brian Engblom, Versus Hockey Studio Analyst and winner of 3 Stanley Cups with the Montreal Canadians, to Salt Lake City to be interviewed for our presentation of 50 Hockey Tips.

Brian Engblom is well known in the hockey community for sporting one of the best mullets in the world of hockey. However, Brian cut his hair before the start of the 2008 season. It was a shock to many so we decided to ask Brian about it at the end of his interview.