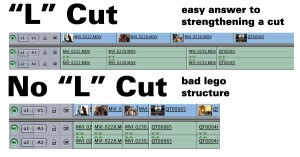 One day I sat in with Steve as he was (I would call this a spoiler alert, but in most cases if you haven’t seen the movie by now it’s because you don’t care enough to) editing the scene where Elizabeth escapes Davy Jone’s ship, The Flying Dutchmen, and Commodore Norrington is killed by the senile Bootstrap Bill.

In past interning experiences, I just sat in the room same room as the editor, on the comfortable couch, trying not to fall asleep as the editor worked his magic. At times it was hard to take note of what the editor was doing other than replaying the same thing over and over. However, Steve provided me with a great learning experience. He showed me this particular scene two different ways.

The sequence is shown (off of my memory anyway) in the following order:

Steve showed me his first edit. This way, between points 2 and 3, he had used an obvious “L” cut. You could tell because you heard Bootstrap Bill yell to startle Norrington and Elizabeth before you saw Bootstrap. The second way he showed the me the sequence was without an “L” cut. We saw Bootstrap see that Norrington was talking to Elizabeth and then he yells at them.

“Which was was better?” Steve asked, as if I was really any sort of authority to make a decision.

“The first cut.” I answered. I was confident, but nervous because I felt like Steve was giving me some sort of initial test to see how interested I was in what he was doing.

Coming off of reading “In the Blink of an Eye” a year or two earlier, I gave the simplest answer “There is more emotion in that edit.”

It was a better cut. The lesson here is not that “L” cuts always make a scene more emotional or they aren’t always the answer, but it’s a simple edit we can use to beautify our edits, hide hard edits without defaulting to a transition or “band-aid dissolve.”

However far along your film might be in the edit bay, look to the “L” cut when in doubt. It’s saved us all from a bad edit and added a comedic, horrifying or dramatic feeling when we’ve looked to it for an answer.

Do you have a good example of an “L” cut you’ve used in a cut? Want to share a link? Leave a comment to show some great examples to us.

*** Note: There is an L Cut and a J Cut. An L Cut is where the video comes in on the next clip before the audio does and the J clip is vice versa. Thanks to Art G. for reminding to clarify. The illustration up top shows both examples. I more often hear L Cut from people and forgot to mention the difference.